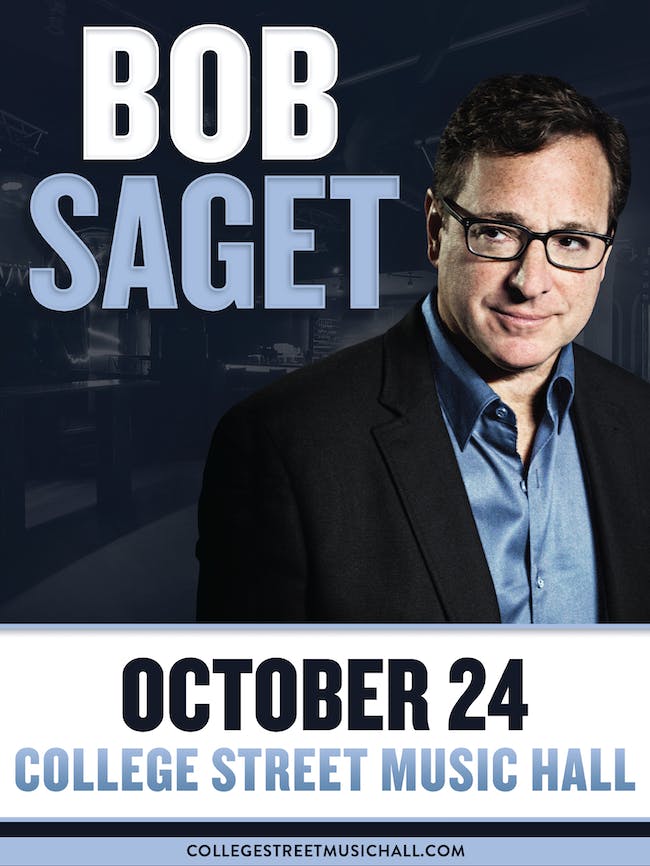 iCal
Google
This event is fully reserved seated on the Floor.

Yes, Bob Saget has starred in many successful television shows, including two of the most family-friendly shows network TV has ever produced ("Full House" and "Americas Funniest Home Videos") but he’s also an out of his mind, Grammy-nominated standup comedian for over thirty years. From his HBO special "That Ain't Right" to his scene-stealing cameos in "Entourage," and "The Aristocrats," it’s always effective as Saget embraces his dark side.

From directing MGM’s cult favorite feature film "Dirty Work," to directing and producing the highly acclaimed ABC television movie, "For Hope," to starring in the critically acclaimed, Paul Weitz off-Broadway play, "Privilege, to starring on Broadway in the Tony Award winning "The Drowsy Chaperone," Bob Saget shows no signs of stopping. Ever.

In 2007 came the hugely successful DVD release of "Farce of the Penguins," an R-rated comedy/documentary/love story, that he voiced-over, wrote, directed, and produced, with producer David Permut. And then came the hit NBC quiz show "1 VS 100," where Bob ad-libbed his way through the one-hour prime time format. In 2008, "The Comedy Central Roast of Bob Saget" premiered to the second highest ratings of all TV that night, second only to the Olympics.

For many years now, Bob has been a proud board member of the Scleroderma Research Foundation. He co-produces and hosts "Cool Comedy Hot Cuisine" fundraising events in Los Angeles, New York, Las Vegas and San Francisco. To date, they have raised over 40 million dollars for the SRF.

Bob was seen several times reprising the role of “Himself” on HBO’s hit series “Entourage” as well as a cameo in the film. He also starred in his own documentary comedy series for A&E titled, “Strange Days with Bob Saget,” an exploration of unusual subcultures in America.

His 2013 one-hour stand-up special, That’s What I’m Talkin’ About, was nominated for a 2014 Grammy Award for Best Comedy Album. The special was filmed at The Moore Theatre in Seattle, premiered on Showtime in May 2013 and is now available as a CD, DVD and download, and on Netflix.

Bob’s first book is a New York Times Best Seller - DIRTY DADDY was released on April 8, 2014 to critical acclaim with Vanity Fair calling it, “Hilarious and at times heartbreaking.” The book is also available as an audio book, recorded by Bob himself.

In January 2016, Bob finished a very fulfilling and successful 9-week run on Broadway in the Tony-nominated play, Hand To God, playing the part of a Lutheran minister, Pastor Greg. That year he also co-starred in the film, A Stand Up Guy and was seen in the first and second seasons of the hit Netflix series, Fuller House. Season 3 of Fuller House premiered in 2017, Season 4 premiered in 2018, and Bob is having a great deal of fun with his TV family as they shoot the fifth and final season.

Bob’s new hour-long stand-up special, Zero To Sixty, was shot in Brooklyn at The Williamsburg Hall of Music in May 2017. Zero To Sixty premiered worldwide on November 14, 2017 on multiple digital platforms including Amazon Prime, iTunes, Comcast, AT&T, Charter, DirecTV, Dish, Google Play and many others. It's available in movie form as well as a comedy album including vinyl LPs as well as streaming and downloads for all forms.

Bob is directing a documentary about legendary comedian, actor, writer and above all, artist, Martin Mull, produced by Kevin Bright.

In this original dark comedy, Ed (Bob Saget), reluctantly calls together an oddball assortment of friends and family to intervene on the supposed drug habit of his 15-year-old son, Benjamin (Max Burkholder). What quickly follows is a night of finger-pointing, petty thievery, adulterous backstabbing, and a seesaw of crooked emotional revelations — all leading to the misguided but sincere attempt to heal this dysfunctional family.

Bob will host, write and Executive Produce the new ABC series, Videos After Dark, featuring home videos with an edgier twist. The show premiered an hour-long first look on March 12 with the full season premiering later this year.

Bob made his London performance debut on September 21, 2018 at The Leicester Square Theatre and he continues performing standup throughout North America.

Detroit native Mike Young is a comedin/writer/director who got his start in stand up comedy like Woddy Allen, Barry Levinson and Judd Apatow before him. His real life like subject matter and streetwise sensibilities make Young an original voice in entertainment.

After the release of “Work In Progress” his first comedy album Mike teamed up with actor/producer Tobey Maguire to develop a sitcom based on Mike’s upbringing in Detroit. They sold the show to ABC where Mike wrote the show. Maguire and Young would team up once more with HBO for a half hour scripted comedy entitled The Light. HBO would prove to be a fan of Mike’s writing and bought another half hour from Young and producer Scott Stuber.

Always looking to stretch his creative muscles Mike took to ghosting “This Book Has Balls” by Michael Rapaport for Simon and Shuster. The book is out Oct 24th 2017.

Young’s feature writing/directing debut My Man Is A Loser starring Michael Rapaport, John Stamos and Tika Sumpter was picked up by Lionsgate. Mike’s sophomore effort would be the gangster comedy, A Stand Up Guy starring Danny A, Michael Rapaport, Ethan Suplee and Bob Saget:. The film was distributed by The Orchard and bought by Netflix. Young also wrote and Executive Produced Grounded starring Aaron Paul and Jeff Daniels set for release in 2020. The film was produced by Gary Gilbert (La La Land.)

Continuing his foray into TV Young signed a deal with Warner Brothers to write a half hour series based on Kanye West’s early days in the rap game. Kanye West is an EP on the project. A one-hour drama set in the Detroit underworld with Eminem signed on as Executive Producer and Antoine Fuqua set to direct is now in the works. Most recently Young teamed up with the star of the series Entourage, Kevin Connolly for Single Mike, a half hour comedy based on Mike’s life in Los Angeles.