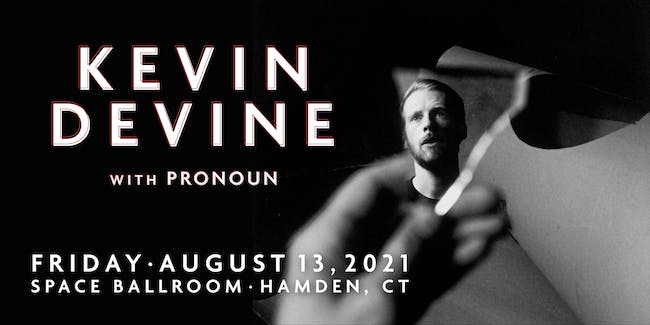 Kevin Devine is an independent singer/songwriter from Brooklyn, NY. He plays alone, with his Goddamn Band, and as a member of Bad Books.

When you turn on pronoun’s 2019 full-length debut, i’ll show you stronger [Rhyme & Reason Records], you’ll be met with a barrage of fuzzy guitars, thick bass lines, airy synths, and D.I.Y. production. The first inclination would be to attribute this sonic groundswell to a full band of five, four, or (at least) three musicians tuned in and cranked up to ten (maybe even louder).

However, it all comes from the mind, heart, and spirit of one-woman: Alyse Vellturo.

With rudimentary knowledge of production, the artist personally recorded and produced these twelve tracks alone in her tiny apartment, achieving an all-encompassing sound she deems, “indie-emo-bedroom-rock-that no-one-asked-for.” Living up to the title i’ll show you stronger, a series of serendipitous events empowered her to realize the strength behind this body of work.

It doesn’t just represent a lifetime dedicated to writing and performing music come full circle, but it also represents a bright spot following a trio of tumultuous years.

“The album is sort of about everything working out and falling into place,” she says. “I abandoned the idea of being an artist when I stepped foot in to Berklee College of Music and discovered how mediocre I was compared to the rest. This led me to production and engineering of other artists, but slowly realized more and more studios were closing and I didn’t feel like cleaning bathrooms and doing lunch runs for a year. Which lead me in to the business side of working in management and at record labels. I thought I had found my calling but over a decade past me giving up I decided to start my own music project from a very vulnerable place. All my experiences before started to make sense and fall in to place.”

The project started to materialize as early as 2015 with her debut EP as pronoun, There’s no one new around you. Enduring “a horrible breakup,” she refocused on her artistry and wrote this initial body of work in between day jobs in the industry. Upheld by her production, instrumentation, and voice, pronoun attracted widespread critical acclaim from the likes of the New York Times, Boston Globe, NPR, The Line of Best Fit, and many more. Highlights—“just cuz you can’t” and “a million other things”—both eclipsed 1 million Spotify streams and counting. Additionally, she opened for the likes of Justin Courtney Pierre, Citizen, and Basement, to name a few.