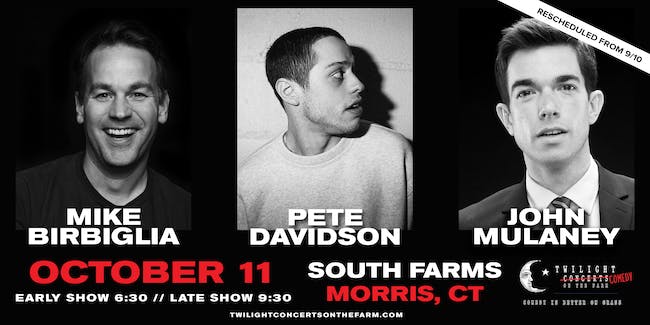 Twilight Comedy On The Farm

RESCHEDULE ANNOUNCEMENT: Due to the impending storm, the Mike Birbiglia, Pete Davidson, and John Mulaney shows originally scheduled for tonight (9/10) at 6:30PM and 9:30PM have been POSTPONED to Sunday, October 11th at South Farms. All tickets will be honored for the new date.

An email will be sent to all purchasers with confirmation details for the new schedule. If you have any further questions, please contact info@manicpresents.com

We thank you for your understanding and look forward to seeing you soon!

Mike Birbiglia is a comedian, storyteller, director and actor who has performed in front of audiences worldwide, from the Sydney Opera House to Broadway. His shows, “My Girlfriend’s Boyfriend” and “Thank God for Jokes,” were both filmed for Netflix. His most recent show, “The New One,” ran for 99 shows at the Cort Theatre.

In addition to performing live, Mike is an author and filmmaker who wrote, directed and starred in the films Sleepwalk with Me and Don’t Think Twice. Mike’s book “Sleepwalk with Me and Other Painfully True Stories” was a New York Times bestseller and a finalist for the Thurber Prize for American Humor. As an actor, Mike has appeared on “Inside Amy Schumer,” HBO’s “Girls” and “Broad City,” as well as in the films Trainwreck, The Fault in Our Stars and Popstar. He plays the role of Danny Pearson on “Orange Is the New Black” and Oscar Langstraat on Showtime’s “Billions.” He is a contributor to “This American Life” on public radio. In 2017, Mike was honored with the Kurt Vonnegut Award for humor.

Davidson, 25, is the youngest member of the current cast, as well as the first SNL cast member to be born in the 1990s. Davidson shot his first one-hour stand up special for Comedy Central in 2016 and was named one of Forbes ’ 2016 “30 Under 30.” He made headlines as one of the featured comedians on the 2015 Comedy Central Roast of Justin Bieber. Davidson can be seen in the Netflix comedy Set It Up , the independent film Big Time Adolescence and Paramount Players’ What Men Want. Most recently, he was in Netflix’s Mötley Crüe biopic The Dirt.

Davidson is from Staten Island, NY.

John Mulaney is an Emmy Award-winning writer and comedian. He recently toured the United States with his stand-up tour, Kid Gorgeous, which was also released as a Netflix special in May 2018 and won the Emmy for Outstanding Writing in a Variety Special. Additionally, he has hosted SNL twice, in April 2018 and March 2019. Previously, John starred in the Broadway hit, Oh, Hello , alongside Nick Kroll. He can most recently be heard in Spider-Man: Into the Spider-Verse, which won the Golden Globe for Best Animated Feature Film.

In 2015 Mulaney released his 3rd hour-long stand up special, a Netflix Original titled The Comeback Kid, which The A.V. Club called “his best hour of his career.” He began his career in New York’s East Village and has since toured around the world.

In 2008, he began writing at Saturday Night Live, where he appeared as a “Weekend Update” correspondent and co-created characters such as “Stefon” with Bill Hader. He currently writes for IFC’s Documentary Now! and for Netflix’s Big Mouth , on which he voices the character of “Andrew.” Mulaney’s first comedy album, The Top Part , was released in 2009. He released his second Comedy Central special and album, New In Town , in 2012, and upon review, Ken Tucker of Entertainment Weekly hailed Mulaney as “one of the best stand-up comics alive.”