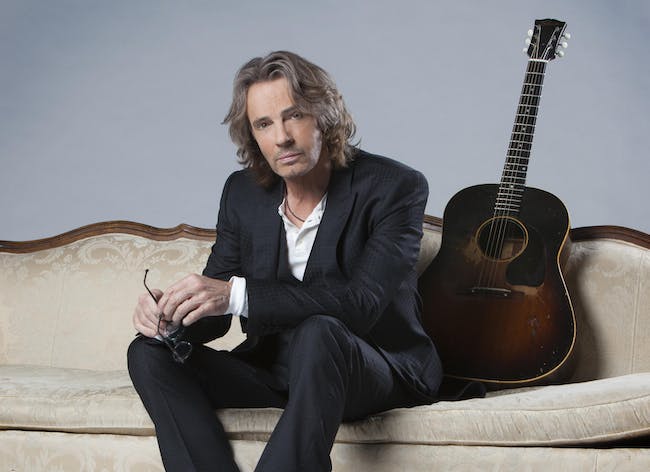 Rick Springfield’s first love has always been music, a lifelong passion ignited after picking up his first guitar at the age of 12 in his native Australia. Mastering the craft of songwriting far preceded his accomplishments as an actor and best-selling author.

With 25 million records sold, a Grammy® Award for his No. 1 smash-hit Jessie’s Girl, and whopping 17 Top-40 hits including Don’t Talk to Strangers, An Affair of the Heart, I've Done Everything for You, Love Somebody and Human Touch, Springfield has no intention of taking his foot off the accelerator. “I put everything I've got into making records,” he says. “Sometimes people think they have you pegged but I trust my music show them otherwise.”

Never one to be confined to the recording studio where the music is born, Springfield has toured for over 30 years, hand-delivering the hits to millions of fans worldwide during his legendary, high-energy live shows. Hardly content walking in his own footprints for very long, fall 2013 saw Springfield reinvent himself yet again performing for the first time as a purely solo act. Rick Springfield’s “Stripped Down” performances offer an intimate glimpse in to the amazing life he’s experienced through music, with personal stories introducing each song in the set. “Some are favorite songs that I’ve written that I’ve never performed live because they’ve never quite fit into the full band live show. I think fans are as excited to now hear these songs live as I am to play them.”

Excited fans, sell-out shows and overwhelming critical acclaim have made Rick Springfield “Stripped Down” one of the must-see shows of 2014. “…fans came in droves, selling out both shows practically from the get go…the night as a whole achieved its purpose of revealing several unseen sides of Springfield beyond the most obvious…” says the Illinois Entertainer.

Springfield will take a short hiatus from his successful “Stripped Down” solo tour this summer, hitting the road with his band on a co-headlining tour with friends Pat Benatar and Neil Giraldo. The multi-city tour kicks off June 28th in Atlanta, GA with additional dates across the U.S. through July. This tour marks the first time that Rick will tour with Pat & Neil. Springfield says, “Although I first met Pat and Neil when Neil played on the original recording of Jessie’s Girl in 1980, it took 35 years before we got together to tour. It should be one for the books.” Following his summer tour, Springfield will return to his native Australia this October for his first headline tour there in 20 years. Springfield will wrap up 2014 with an additional string of “Stripped Down” performances.

On May 6th 2014, Simon & Schuster’s Touchtone imprint will publish Springfield’s fiction debut, MAGNIFICENT VIBRATION. Already receiving rave reviews, Booklist says, “Captivating, poignant, and hilarious, MAGNIFICENT VIBRATION proves that some of the most interesting stories can come from pretty unlikely places.” The deeply meaningful and over-the-top novel features a hero who has hit a dead end in his life but who serendipitously receives an 800 connection to God via an inscription in a mysterious self-help book and who just may have a shot at saving the planet. "The only good grades I ever got in school before I was kicked out were for creative writing,” says Springfield. “I thought that fiction might be in my future but then my career took a different path once the Beatles showed me what a blast being in a band could be. Writing my memoir reminded me how much I love the craft. So I decided to give fiction a shot again. MAGNIFICENT VIBRATION is the result. I’m still not quite sure where it came from, but once I got going, it practically wrote itself. I’ve heard writers I admire speak of that phenomenon, so maybe I’m on the right track.”

Springfield’s autobiography, Late, Late at Night (Touchstone 2010) entered The New York Times best-seller list at No. 13 while also landing on the Los Angeles Times and Publishers Weekly top-sellers lists. Rolling Stone named it one of the top-25 rock memoirs of all time. In Late, Late At Night, which Springfield wrote entirely himself, Rick speaks frankly about the depression he’s battled throughout his life. “I’m not the shiny, happy guy people think I am. I suppose they confuse who I really am with my stage persona,” says Springfield. “But good can come from hardship. Depression causes me to over-analyze events in my life, and that’s actually a bonus when it comes to songwriting. Hey, if things had gone my way at the time and I’d gotten laid, Jessie’s Girl would never have been written.”

In 2013, Springfield teamed up with Dave Grohl on Grohl’s multi-faceted passion project, Sound City, which encompassed a documentary (Sound City), an album (Sound City: Real to Reel), and the Sound City Players tour, a string of critically acclaimed shows with fellow documentary subjects including Stevie Nicks, Trent Reznor, John Fogerty, and Lee Ving among others. The Foo Fighters served as backing band for Rick’s set with Dave Grohl’s notable declarations during the performances as, "I want to be Rick Springfield!" and “Bucket list. Check!" CraveOnline called Sound City: Real to Reel “a powerhouse collection of some of the greatest musical talent ever assembled.” Springfield and Grohl co-wrote The Man That Never Was, which was inspired by a true story from World War II. “Writing music can be a solo endeavor but at its heart, rock is collaborative. Working with Dave and the Foo Fighters was collaboration at its best. Those guys are true musicians: creative, spontaneous, generous, and talented. Working with them was a great experience.” The Man That Never Was has been widely recognized by critics as one of the best songs on the Sound City soundtrack. “The highlights… are led by Stevie Nicks and, yes, Rick Springfield.” (People) Springfield has also been hailed for his part in the documentary: “The film's breakout story is arguably Rick Springfield.” (Rolling Stone) The Sound City: Real to Reel CD also won the 2014 Grammy® for Best Compilation Soundtrack.

In October 2012, Springfield released, Songs for the End of the World, his 17th studio recording and collaboration with songwriter Matt Bissonette. Songs for the End of the World addresses the need to be consoled and cherished in an age of anxiety about the future of the planet. Filled with personal lyrics and giant hooks, it’s a pop/rock tour de force. “It's high energy,” Rick explains about the album’s mix of moods. “At its core, it’s about looking for love and solace while the world around us—everything we once felt sure about—disintegrates. Even with the end so palpably imminent, we’re still human beings, filled with longing and—maybe against all odds—hope. I believe music is healing,” says Springfield. The Tampa Bay Times said, “Springfield remains one of the best live entertainers of his generation -- maybe the top dog -- so if he wants to explore darker closets on studio albums, I'm not going to discourage him one bit. Especially when the result is a project I enjoy as much as this one.”

Also in 2012, an independently produced documentary titled An Affair of the Heart captured the relationship between Rick Springfield and his loyal fanbase. The documentary debuted at numerous film festivals, winning special jury awards at the Nashville, Florida, Boston, and Daytona Film Festivals. An Affair of the Heart premiered to record numbers on the EPIX channel in May 2013 and is now available on DVD.

In the early ’70s, Springfield had a handful of hit records in his native Australia before emigrating to the United States. Bouncing between record labels and looking to make ends meet until his musical career took hold in the US, he resorted to acting and eventually landing the role of Dr. Noah Drake during the heyday and cult phenomenon of daytime TV’s General Hospital. Simultaneously, the explosive success of his breakthrough 1981 album Working Class Dog was followed by Success Hasn’t Spoiled Me Yet, Living in Oz, Hard to Hold soundtrack and Tao, establishing Springfield as a multi-platinum superstar. Despite his original and unwavering passion for music, many at the time mistook Springfield for a soap star hoping to convert daytime success to a faux and possibly fleeting music career. History proves that nothing could have been further from the truth. Springfield is content to let his music and four decades of productivity speak for itself. “If you pay attention to where I’ve put my time, who I really am becomes clear.” In addition to General Hospital, Rick’s other notable TV roles include a 4-episode arc on Californication, Hawaii Five-O, Drop Dead Diva, Hot In Cleveland and the 1994-1997 TV series High Tide.

Springfield’s current musical career renaissance can be traced back to the albums Shock/Denial/Anger/Acceptance (2004) and Venus in Overdrive (Ume, 2008), which entered the Billboard sales charts at No. 28, his highest debut in 20 years. In 2005, Sony Legacy’s released the retrospective double CD Written in Rock: The Rick Springfield Anthology.