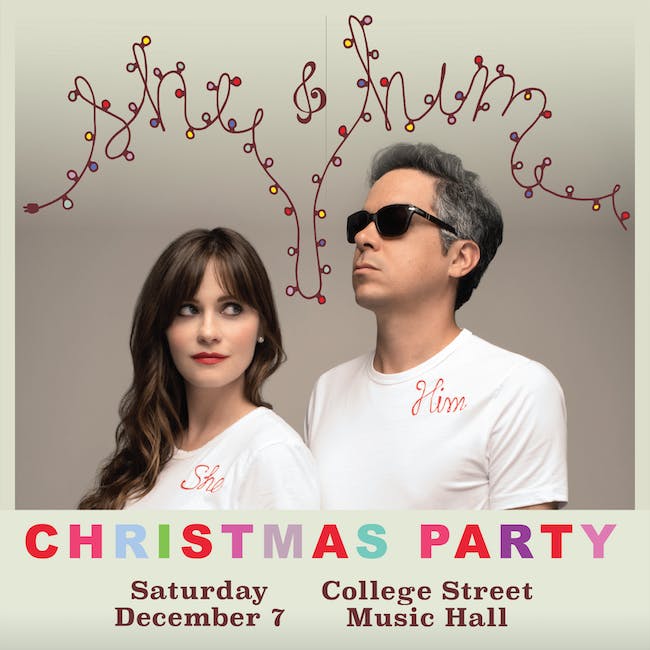 She & Him (Zooey Deschanel and M. Ward) - Christmas Party

iCal
Google
This event is General Admission Standing Room on the Floor and Reserved Seated in the Balcony.

$1 from each ticket sold for this show will support Baby 2 Baby.

Zooey Deschanel and Matt Ward, aka She & Him, are as comfortable and complementary a musical pair as Les Paul and Mary Ford. Matt and Zooey make music for an eternal springtime, when the temperature is warm enough to go riding with the top (or at least the windows) rolled down and the radio turned up.

They occupy an alternate universe where the saddest of songs feel as warm as sun showers; the rain may be coming down, but somewhere nearby, everything looks bright. What began as a fascinating no-strings-attached collaboration has evolved into a bona fide touring band, and She & Him are here to stay.

Pete Lee was the first standup comedian to get a standing ovation on The Tonight Show Starring Jimmy Fallon. This happened after Jimmy personally attended one of Pete’s live shows in NYC and immediately invited him on the show. Pete’s joyful humor comes from his Midwestern roots. Raised in Janesville, WI by divorced parents and a 19-inch television, he was destined to pursue a career in entertainment. In 2005, Pete flew to New York to make his television debut on Comedy Central’s Premium Blend, and the taping went so well that he decided to move to NYC. Soon after moving to NYC, he was selected to perform at the Just for Laughs Comedy Festival in Montreal, where he was voted a standout performer. In 2008 Pete made his network television debut performing on NBC’s Last Comic Standing finishing as a semi-finalist. That same year, he made his television acting debut on the CBS Soap Opera As The World Turns. At the end of 2008, he shot his own Comedy Central Half Hour Special, which earned him a cult following at comedy clubs, and the opportunity to perform over the next ten years at 500 colleges across the country.

In 2010 Pete began producing and editing his own shows for the Internet which led to getting his own web show on MSN.com called New York Minute:30. His web shows attracted the attention of television talent scouts and in 2012 he was hired to be a writer and cast member on FUSE TV’s Video on Trial and the NFL Network’s Top 10’s. In 2013, Pete was hired as a cast member on VH1’s Best Week Ever, where he was a writer and cast member for three seasons. That same year, he made his late night television debut on CBS’s Late Show with David Letterman.

Currently, Pete is a cast member of TruTV’s Greatest Ever and he hosts his own segment on Nickelodeon’s Nick Toons, in co-ordination with the NFL, called NFL Rush. He’s also a regular on TruTV’s Comedy Knockout and Comedy Central’s Roast Battle. And he starred in a documentary titled I Need You to Kill that is now available on iTunes and Amazon.

If you haven’t heard of Pete Lee yet, prepare to tell other people.